Broken record time: There are plenty of pre-modern (read: prior to BATMAN BEGINS/IRON MAN) superhero movies that absolutely hold up. Sam Raimi's SPIDER-MAN is one. The 1978 SUPERMAN is one. BATMAN RETURNS... sort of. The first two BLADE movies, definitely - I know we're only "supposed" to like BLADE II because of Guillermo del Toro, but the first one is totally serviceable. 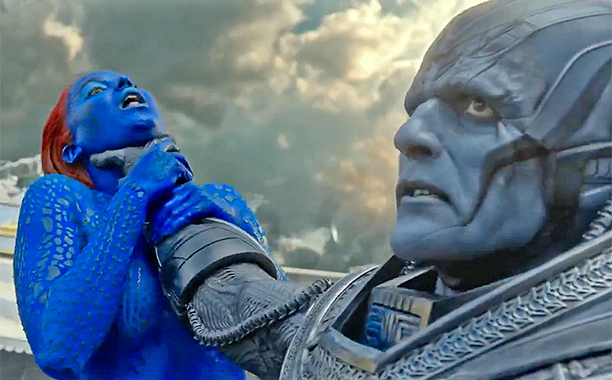 But the X-MEN movies? No. They don't hold up. Portions of them do: McKellan's Magneto is a hell of a performance, Jackman as Wolverine was a great discovery, Patrick Stewart is... basically doing exactly what you expected, so it's fine. Zeroing in on the gay-youth metaphor was a good idea. Sort-of-nude Mystique is iconic. X2 has a decent-ish screenplay, which helps alot. But taken as a whole? Only FIRST CLASS is a straight-up good movie, and THE WOLVERINE is 2/3rds of a good B-movie. The rest of them are varying degrees of straight-up bad (ORIGINS: WOLVERINE and X3 being the worst) - aesthetically ugly, blandly directed, filler-packed half-efforts of which X2 gets a pass because it's screenplay is good enough and restricting 90% of the action to the X-Mansion, underlit hallways and... more underlit hallways helps disguise Bryan Singer's inability to properly direct action sequences or really any sequence with more than one plane of action and more than three active characters.

(SPOILERS after the jump)

And look, I get it: For a moment there, this looked like the best we could've possibly hoped for, isolated scenes like Wolverine defending the Mansion and Iceman "coming out" to his parents are damn close to transcendent and seeing the Phoenix shape under the water was Nick Fury before Nick Fury. I was there, too, I understand. But I've also lived through the decade-plus hence with clear eyes, and apart from FIRST CLASS (again, the only good one) the only thing more disappointing in hindsight than the totality of the X-MEN movies is the whole idea of Bryan Singer being a major talent as opposed to an unspectacular point-and-shoot dramatist of what we used to call TV-level visual chops.

What I'm saying is: It's okay to let this series go. I understand why we cling to it, but enough is enough. Propping up this franchise in 2016 is like unironically propping up HAWK THE SLAYER after LORD OF THE RINGS.

But whatever. Thanks to DEADPOOL we're going to keep getting these now in one form or another, even as it begins to feel more and more like Fox intends to jog in place accomplishing nothing special (the next movie will apparently be set in the 90s to maintain whatever the nonsensical continuity is now) for the main series while they wait for Disney/Marvel to make them a Spidey-style shared custody offer; so it's time to watch the surviving FIRST CLASS actors team up with the new baby-faced versions of the Parts 1-3 characters whose actors have aged out of the franchise for what amounts (in terms of actual plot) to a 2 1/2 hour explanation for why Professor Xavier went bald early. Riveting.

Any pleasures to be had amid this tedium are strictly of the ironic variety. Specifically: It's enormous fun to watch poor Oscar Isaac (usually one of the most expressive and versatile actors working today) stomp around looking like a 1970s SUPER SENTAI villain in absurdly fake-looking prosthetic makeup and plastic armor (there isn't a single prop, set, costume or makeup effect in the film that doesn't look Schumacher-BATMAN-level phony) as Apocalypse, supposedly "The First Mutant" and our basis for various myths about gods and demons etc. Buried alive in Ancient Egypt, he wakes up in the alt-reality 1980s created by DAYS OF FUTURE PAST's time-travel meddling and decides that humanity has fucked up the planet so bad that he needs to blow everything up and start over as Mutant God again; so he assembles a team consisting of Storm, Angel, Magento and newbie mutant Psylocke and supercharges their powers to help him kidnap Professor X so that he can hijack his mind-powers to find and manipulate every mutant on Earth at once because that's exactly what the bad guys did in X2 and that was the last time anyone not named Matthew Vaughn made a good X-MEN movie.

Meanwhile, plot contrivances (and contractual obligations) bring Mystique (J-Law again, somehow affecting her most vacant, disinterested thousand-yard-stare yet) back to the Xavier School at the same relative time as the new Barely Legal versions of Cyclops, Jean Grey and Nightcrawler are all turning up along with still-mindwiped Moira MacTaggart, who wants help running down Apocalypse and Magneto - who's evil again because he moved to Poland and tried to start a family and just guess how that ended up. It's all just a lot of marking time until Apocalypse can show up and blow the school to smithereens, compelling Mystique to get over her resistance to heroism (young mutants now hero-worship "The Blue Woman" as a Che-style revolutionary icon that she wants no part of) and re-assemble The X-Men in order to rescue Charles and beat Apocalypse...

...but only after an insultingly-pointless, utterly unnecessary plot detour during which the main good guys are abducted by Baby General Stryker and whisked off to an underground facility exclusively so that they can bump into Hugh Jackman for about two minutes of bloodless Wolverine cameo-carnage and then promptly hurry back on their way to back to the main storyline. It's as nakedly awkward as I'm making it sound, reeks of post-production interference and I wouldn't be the least bit surprised to find out it was all created in reshoots - and yet, somehow, Wolverine still has more actual bearing on the plot than (Arch?)Angel, Storm and Psylocke; none of whom serve even a contrived purpose since Apocalypse's big scheme is essentially: Super-Magneto destroys the world with Earthquakes.

On balance it's not quite as disastrously bad as X3 and just about even with ORIGINS: WOLVERINE in terms of enthusiastically-boneheaded stupidity, to the point where it might even be "fun" after a fashion if Singer was a better director of spectacle or had the capacity to have genuine fun within the genre. Unfortunately, APOCALYPSE has clearly been designed with the aim of aping the structure/tone of the most-recent Marvel features - read: witty banter, elaborate fight sequences, Lucky Charms color-palette, a giant climactic fight scene in the middle of basically the whole damn world exploding into pixel showers in the background - which would make for a headache-inducing clash with Singer's prevailing "sullen-Ambercrombie-models-looking-pouty" aesthetic that it likely wouldn't have looked good if he could direct it properly - which he can't.

It's honestly shocking just how bad the "big" moments of the film look, particularly a third act mega-brawl set in a blown-to-bits Cairo. Outrageously poor green-screen compositing and lighting/lensing choices seemingly designed to highlight how fake everyone looks (poor Olivia Munn looks like she's posing for an expensive-for-2002 cosplay shoot) would be forgivable with even a minimum of visual flourish, but the composite/soundstage/CGI mix is so stagey and basic that your average Sid & Marty Kroft show was overall more inventive about disguising their plate-shots. Fassbender's Magneto, hovering unconvincingly amid swirling digital chaos, looks less like a Horseman of The Apocalypse than he does a badly-dressed many giving a TED Talk about advances in particle-FX animation.

In a moment that crystallizes the "soulless xerox of an MCU entry" sensibility intrinsic to the whole enterprise, the film opts to insert it's requisite Stan Lee cameo not into the margins or a tension-relieving "funny" scene; but into one of the most (theoretically) dramatic moments possible - garaunteeing gufaws from the audience at one of the least opportune times. By the same token, since everybody (but me) made an obnoxiously big deal out of the Quicksilver slo-mo scene in DAYS OF FUTURE PAST, we get two more of them here: One of which turns what should be a big deal plot point into a jokey "Ha! I remember that 80s song!" spotfest, the other of which serves to render him so overpowered it feels pointless to have any other X-Men around - even if everyone didn't keep forgetting which powers they have until they need it for a specific beat.

The only question I end up having as all of this dull drivel winds down is whether or not having to follow one of the best recent superhero movies (CIVIL WAR) and one of the all-time worst (BATMAN V SUPERMAN) to theaters works out against the film or in its favor. I'm on record not believing in "superhero fatigue," but X-MEN: APOCALYPSE is exactly the kind of movie that under the right circumstances could get me way down in the dumps about the genre - it's not even bad enough to make for interesting "how did this abomination happen!?" discussion like BVS or FANT4STIC. There's no mystery to how pointless, uninspired fare like this get's made - or to why there'll almost certainly be more of it before we're through.

Enjoy this review? Please consider contributing to The MovieBob Patreon.