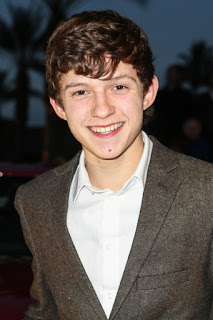 Marvel's official blog has announced that Tom Holland is the new, Marvel Cinematic Universe official SPIDER-MAN. The young British actor (he's 19 but looks like he's barely out of grade school) will likely (read: definately, but we're supposed to pretend everyone doesn't already know this) be hitting the Atlanta, Georgia set of CAPTAIN AMERICA: CIVIL WAR in the near future before embarking on his own franchise-starter solo feature; which the same blog post also reveals will be directed by Jon Watts, who helmed CLOWN for Eli Roth and whose COP CAR (the producers of which are popping champagne right now) turned heads at Sundance.

Holland previously appeared in THE IMPOSSIBLE, a terrible movie you don't need to pretend you saw, remember or have even heard of. Already onboard the project is co-producer Amy Pascal, who'll be in charge of pretending that Sony has any actual creative function on the film apart from following dictates from Marvel boss Kevin Feige.

All of this lines up pretty well with the buzz surrounding the project for a long time now, in terms of
the solo feature looking for a new director with action chops and that Marvel very much wanted a child (or child-looking) actor for the part - both to set Spider-Man apart from the predominantly middle-aged AVENGERS stars and also to let them/Sony ground the initial wave of solo features firmly in Peter Parker's High School (maybe also College) years, which also happen to encompass the Stan Lee/Steve Ditko/Jon Romita eras generally seen as the character's Golden Age in the comics.

It's easy to be cynical about this, since so much of it is being dictated by business needs and (previously) mine-is-bigger-than-yours jockeying by Marvel and Sony: Another reboot (though not, apparently, another full-length origin story) coming right on the heels of the AMAZING SPIDER-MAN disaster(s) and the built-in promise of a lot of "Oh, hey! It's Spider-Man!" stuff popping up in the other Marvel movies (it's assumed that he'll appear in CIVIL WAR and at least one of the INFINITY WAR movies) for however long it takes Marvel to re-assimilate ownership fully - or to just acquire the whole of Sony's struggling film division, which I'm hearing is among Marvel/Disney's ultimate goals down the line.

But I like the casting. Anyone would've been an improvement over Andrew Garfield's mush-mouthed mugging, but the idea of re-framing Spidey as the Marvel hero where the "man" part is a put-on (the best Spider-Man moment ever filmed to date involved the line "He's just a kid...") is getting back to the core original appeal of the character in a way even the Sam Raimi movies didn't: This is the hero who lives in the same world, age and experience-wise, as the target-audience of the Marvel movies. That's an interesting idea on its face.

No one really knows (or is saying) what the setup of the solo movie is, though early rumors included a supporting role for Robert Downey Jr's Iron Man and "SPIDER-MAN: THE NEW AVENGER" as a possible title, with the premise concerning an already-established Spider-Man bugging Tony Stark about joining the team - which, if true, means we already know who wins the CIVIL WAR.